Banjul, The Gambia – On October 26, 2019, the International Center for Transitional Justice (ICTJ) in partnership with an artist collective in The Gambia will premiere a short documentary film about a group of young musicians and activists taking part in the country’s unfolding transitional justice process. 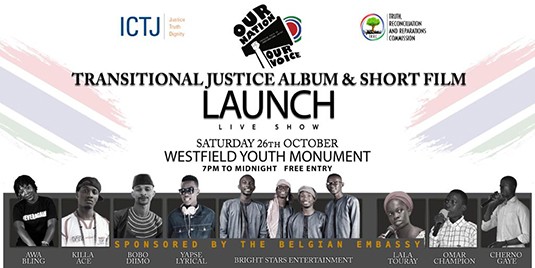 Banjul, The Gambia – On October 26, 2019, the International Center for Transitional Justice (ICTJ) in partnership with an artist collective in The Gambia will premiere a short documentary film about a group of young musicians and activists taking part in the country’s unfolding transitional justice process, which was put in place to address the abuses of former president Yahya Jammeh’s repressive regime. The partners who coproduced the film will officially release it in a public screening at the Youth Monument in Westfield, Serekunda. The event will also feature performances by members of the Our Nation Our Voice collective.

Through the power of music and storytelling, members of the collective seek to raise awareness among young people and other Gambians about the past regime’s brutal legacy, the ongoing transitional justice process, and how they can contribute to a more inclusive, just, and democratic society.

The film follows members of the collective who took to the road as part of an artist caravan that traveled across the country for 11 days in February 2019 and to some of the hardest-to-reach communities. The caravan included musicians such as hip-hop artist and activist Killa Ace, rapper-singer Awa Bling, poet and youth leader Lala Touray, Fula cultural artist Boobo Diimo, and others. Student activists also rode along in the caravan, as did youth representatives of the Gambia’s Truth, Reconciliation, and Reparations Commission (TRRC), which in January 2018 began investigating human rights violations committed during the previous regime.

“Our Nation Our Voice has been a truly innovate and successful youth project, and has reached some of the most underserved parts of The Gambia,” explained Didier Gbery, ICTJ’s Head of Program for The Gambia. “It has really woken up young people and others around the country to the crucial role they can and must play in building a peaceful, just, and more inclusive society.”

During 22 years of oppressive rule, former President Jammeh and members of his government orchestrated and carried out massive human rights violations including extrajudicial killings, murders, torture, forced disappearances, and sexual and gender-based violence. Following his defeat in the 2016 elections, a transitional justice process was established to address these abuses and to help transform the country into a more democratic and peaceful one. It includes the TRRC as well as bodies tasked with drafting a new constitution and reforming security sector reforms.

The transitional justice process itself is intended to be inclusive. As such, the ICTJ has convened young people and activists with the goal of increasing young people’s participation in this process as well as The Gambia’s political and policymaking processes more generally. Our Nation Our Voice uses art and creative expression to raise awareness about the transitional justice process and to mobilize young people to engage in it.

About Our Nation Our Voice

The International Center for Transitional Justice (ICTJ) works across society and borders to challenge the causes and address the consequences of massive human rights violations. We affirm victims’ dignity, fight impunity, and promote responsive institutions. ICTJ envisions a world where societies break the cycle of massive human rights violations and lay the foundations for peace, justice, and inclusion. For more information, visit www.ictj.org.