As subscribers, you enjoy timely commentary on what’s happening in transitional justice around the world written by one of our experts exclusively for our monthly World Report newsletter. In this month’s edition, we bid farewell to 2019 by looking back on the experts’ choices of the past year. 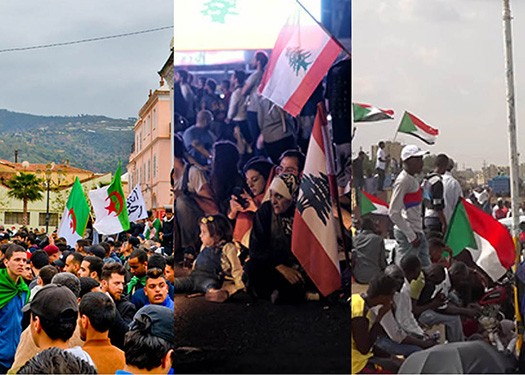 As subscribers, you enjoy timely commentary on what’s happening in transitional justice around the world written by one of our experts exclusively for our monthly World Report newsletter. ICTJ’s global experts are diverse and have wide-ranging experience in countries grappling with legacies of massive human rights abuses. In countries where ICTJ has an office, we rely on local expertise to drive our work on the ground. In this month’s edition, we bid farewell to 2019 by looking back on the experts’ choices of the past year.

We kicked off 2019 with an analysis of Colombia’s Special Jurisdiction for Peace a year into its mandate, written by ICTJ’s head of office for Colombia, Maria Camila Moreno. Then in March, Senior Expert Ruben Carranza reflected on the future of accountability in the Philippines after the country’s withdrawal from the ICC. In “One, Two, Three, Viva L’Algérie!”, Head of Program for Libya Rim El Gantri broke down the months-long protests in Algeria. In May, Program Expert Elena Naughton considered the importance of a student-led reparations fund at Georgetown University. In June, Head of Program for the Gambia Didier Gbery pushed for a victim-centered approach to truth seeking in the Gambia, as the country’s truth commission held public hearings with witnesses, victims, and perpetrators. Following the long-awaited UN High-Level Political Forum in June, Senior Research Expert Roger Duthie made the case for including transitional justice a part of the sustainable development agenda. Our executive director, Fernando Travesí, weighed in on the opportunity for peace, democracy, and justice in Sudan, in the wake of the country’s landmark Constitutional Declaration in August. After two years of negotiations, the Syrian Constitutional Committee was finally agreed upon in September; Special Coordinator for Syria Nousha Kabawat explained how a new constitutional committee might secure a more just future for Syria. In October, Senior Expert Cristián Correa urged parties to find common ground for a negotiated transition in Venezuela, as the political crisis there seems to have reached a stalemate. Finally, as people peacefully filled Lebanon’s streets, calling for an end to corruption, economic disenfranchisement, and government mismanagement, Program Expert Sibley Hawkins explored the role of Lebanon’s youth in the revolution.

We invite you to read an Expert’s Choice that you may have missed or revisit one that still resonates with you, especially in these times of tremendous upheaval around the world and as calls for peace and justice grow louder. We encourage you share them with friends and colleagues, and we look forward to producing this exclusive commentary on events in 2020!