On June 25, President of the Philippines Rodrigo Duterte publicly proposed arming civilian supporters in his war on drugs. His statement comes barely a week after the International Criminal Court’s (ICC) outgoing prosecutor, Fatou Bensouda, announced her request to open an investigation into crimes against humanity related the Philippines’ war on drugs. This step has been long-awaited by victims of the drug war. Nonetheless, the ICC case should be part of a larger, more strategic fight for justice in which the needs, safety, and future of the predominantly poor families victimized by the drug war are central and just as important as naming, shaming, and prosecuting the perpetrators and abettors of these crimes. 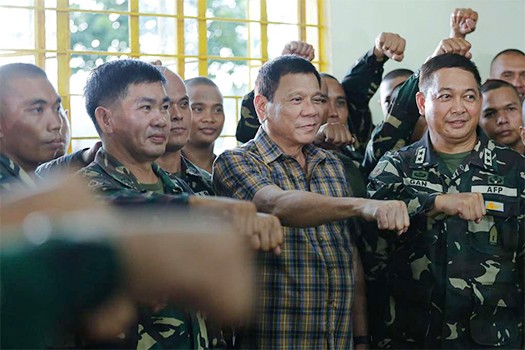 On June 25, President of the Philippines Rodrigo Duterte publicly proposed arming civilian supporters in his war on drugs. “Don’t simply make an arrest [without a weapon],” he told an audience of civilian right-wing paramilitary groups and police officers. “You are not supposed to die. A criminal is supposed to die.” Since Duterte became president in 2016, at least 6,000 and up to as many as 30,000 Filipinos have been killed by the police and by death squads in the Philippine government’s drug war.

Ironically, this month marks the 50th anniversary of the United States’ original “War on Drugs”—the racist, militarized, and ultimately failed anti-drug policy that resulted in human rights abuses and cost American taxpayers over $1 trillion. Duterte, once again, has demonstrated how an authoritarian leader can copy a warped American social policy and make it worse.

What makes Duterte’s call to arm civilians and his greenlight for them to kill “criminals” even more concerning are their timing. They come barely a week after the International Criminal Court’s (ICC) outgoing prosecutor, Fatou Bensouda, announced her request for the court’s authorization to open an investigation into crimes against humanity related the Philippines’ war on drugs. This step has been long-awaited by victims of the drug war. Nonetheless, the ICC case should be part of a larger, more strategic fight for justice in which the needs, safety, and future of the predominantly poor families victimized by the drug war are central and just as important as naming, shaming, and prosecuting the perpetrators and abettors of these crimes. In this larger fight, I suggest the following priorities.

The combination of a crimes against humanity case moving forward in The Hague and the upcoming presidential elections in May 2022 could see Duterte shift from being passively uncooperative to actively undermining investigations, including through violence against potential witnesses and their family members.

Most extrajudicial killings in Duterte’s drug war have taken place in poor, crowded urban communities where what happens when death squads arrive is meant to be heard and even seen by residents. As investigative journalist Sheila Coronel describes it, “Some are left lying on the streets, bathed in blood, or splayed on the shaky wooden floors of shacks in shantytowns along the river, the shoreline of Manila Bay, or further inland, in the densely packed warrens inhabited by the city’s poorest and neediest.” The intention is to strike fear, including fear of coming forward as a witness to these crimes against humanity.

The investigation of the Philippines’ war on drugs will be a test of whether the ICC’s prosecutor’s office has learned the lessons from cases it pursued in countries such as Sudan or Kenya, where sitting heads of government were in a position to obstruct ICC investigations. Sudan is not a state party to the ICC, and, in the Darfur situation, the prosecutor “had to investigate the crimes without visiting the crime scene.” Kenya is a state party to the ICC, but the prosecutor still faced “an unprecedented campaign on social media to expose the identity of protected witnesses, and concerted efforts to intimidate and threaten individuals who would wish to be witnesses.” Without witnesses and stronger evidence, the prosecutor was forced to withdraw charges against Kenya’s president. The ICC’s Victims and Witnesses Unit, which oversees the court’s system of witness protection, thus plays as crucial a role as does the prosecutor’s office.

One promising sign that the prosecutor’s office has learned from these experiences is the reference in its announcement of the Philippines case that the office has “used powers available to the Court prior to the initiation of an investigation to preserve evidence and protect persons who may be at risk.” These measures are important even though the Philippines under Duterte is unlikely to cooperate with the ICC. Evidence, not necessarily cooperation, is what can move criminal accountability forward.

Provide a Platform for Truth-Telling and Memorialization

Duterte’s war on drugs has also been a war against truth. Duterte’s denial of the existence of death squads, his demonization of victims as criminals, and the government’s understating of the numbers of those killed would not have been possible without the weaponization of social media by Duterte’s proxies, particularly on Facebook, which reaches up to 83 million (out of 110 million) Filipinos. Duterte has also imprisoned critics, harassed journalists, and shut down news outlets that have countered his narrative. This coordinated assault on the facts and the press makes it challenging for international accountability mechanisms such as the ICC or the UN Human Rights Council to garner support from the millions of Filipinos whose “truth” has been shaped by the propaganda they encounter on social media.

But because an official truth commission is unlikely under Duterte, an alternative could be to establish unofficial truth commissions—“unofficial” insofar as they would operate without the state’s involvement. They may help to document and preserve evidence, as well as help prepare for official government action on human rights violations or accompany international accountability measures, such as the ICC case. The value of unofficial truth-seeking mechanisms in this context is that they can morally sustain families of victims who otherwise have no acknowledgment and few remedies in sight. They can also catalyze and encourage memorialization initiatives, which so far have only been pursued online, out of fear of retribution and stigmatization, which drug war victims often experience.

While many families victimized by drug war killings are hopeful about the steps taken by the prosecutor, others are “cautious about pinning [their] hopes on the ICC investigation.” As one victim’s mother explained, “I am torn in half. On one hand, the ICC decision is an acknowledgment of our loss. The ruthless way they killed our men, it was as if, because we are poor, we do not know how to feel pain. [On the other hand,] it’s been five years of our whole life turned upside down. My grandson never got to know his father. Where is the justice in that?”

For some victims, holding perpetrators accountable is part of but not the same thing as justice. ICTJ’s own research across the global South shows that survivors and victims’ families see truth telling along with reparations as equally important forms of justice.

The war on drugs targets the Philippine’s poorest citizens. These families are already living precariously, some of them turning to drugs as users or pushers. What happens when those they depend on to survive are killed? What “justice” would they ask for first? They will need assistance. But that assistance is not justice nor is it reparation if unaccompanied by an official acknowledgment from the state of the violations they endured.  With no reparation or even assistance from the state, victims’ families are “pushed deeper into poverty.” Because mostly men have been killed, women in particular shoulder the economic burden as they are left alone to support their families. While there have been nongovernment initiatives to assist drug war victims, led mostly by the Catholic Church, they have had limited impact due to a lack of funding.

The same global North donors that fund ICC prosecutions should consider providing assistance to victims because it can directly sustain them as they participate in drawn-out investigations and trials. It is also important to consider expanding the reparations law for victims of the Marcos dictatorship to cover victims of large-scale post-dictatorship extrajudicial killings, including those committed in the drug war. Those groups at the ICC supporting victims should also consider helping prepare victims’ families to participate in the different stages of the case, including submitting “victim’s views, concerns, and expectations” that can now be done in the current one, as well as to apply for reparations if and when it becomes possible to do so.

While reparations at the ICC are contingent on whether accused perpetrators are convicted, the court should nonetheless do more to ensure that it can enforce future reparations orders by building its institutional capacity to identify, freeze, and later confiscate assets of convicted perpetrators. In the ICC’s recent Independent Expert Review, the experts noted that “stronger Court financial investigations and asset recovery are vital to the effective execution of its mandate and the delivery of justice.”

Wars on drugs are not all the same. The violence and social dislocation they cause will differ according to the history, geography, economic conditions, and available democratic space of the countries where they happen. But whether it is a concocted drug war to justify authoritarian rule as in the Philippines, actual armed confrontations between the state and drug-trafficking groups as in Mexico, or the disproportionate incarceration and violent targeting of Black and brown communities in the United States, what they have in common is that they victimize society’s most marginalized classes of people.

They also share at least one root cause and a consequence: the criminalization of illicit drugs and a militarized state response that invariably targets the poorest while sparing the wealthiest. In a March 2021 opinion piece, commissioners of the  Global Commission on Drug Policy appealed for “space to recognize and acknowledge the harms caused by states through the implementation of drug policies and [that] provides a safe space where victims can unload the burden of fifty years of injustices.” The title of the piece speaks for all who have suffered in drug wars and for those who are helping them: “Transitional Justice Must Not Forget the Victims of the War on Drugs.”