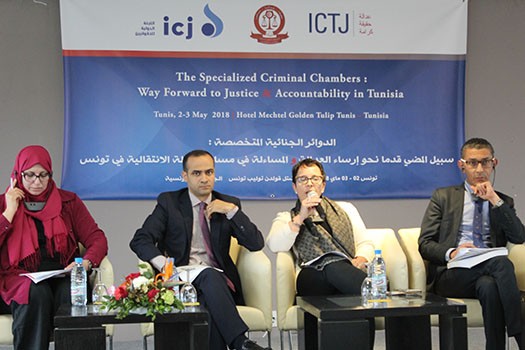 At the top of the agenda was the imminent dismantling of the IVD, which is responsible for referring cases of human rights abuses to the SCC but whose mandate expires at the end of May after parliament denied a request for an extension in late March. ICTJ also took advantage of the event to launch three new briefing papers on transitional justice in Tunisia, the topics of which are deeply relevant to the SCC and their operations.

An Uncertain Future for Truth, Justice, and Dignity in Tunisia

Four years after the IVD’s establishment, it officially began referring cases of gross human rights violations to the SCC for adjudication in early March, when it transferred the first such case. The 2013 Organic Law on Establishing and Organizing Transitional Justice (2013 Organic Law) stipulates that the IVD refer such cases to this specialized jurisdiction, as an essential step toward the realization of victims’ right to justice. So far, the IVD has transferred only four cases, though it is expected to refer another 30 before the commission ceases operations at the end of the month.

This number is a far cry from the nearly 63,000 complaints that have been lodged with the IVD, many of which may be grave human rights abuses. Whether these outstanding cases ever reach adjudication is uncertain, particularly since it appears that the IVD has not processed or investigated most of them. Moreover, no provision has been made that would attach to the SCC a specialized body tasked with investigating them, further leaving their fate hanging in the balance.

Legal and Practical Challenges and the Role of Victims

The SCC face a number of legal and practical obstacles as they move forward. It is still unclear how the SCC will apply Tunisian law, which dilutes the principle of legality and does away with the principles of non-retroactivity and res judicata for gross human rights violations. The SCC will also most certainly grapple with how to reconcile domestic and international human rights law, since the Tunisian Penal Code does not provide redress for international crimes.

For victims, the ability of the SCC to hold perpetrators accountable to the fullest possible extent of the law is a matter of vital importance as the SCC is the main mechanism by which their rights can be vindicated. The public hearings attest to the critical role of victims’ testimony in achieving criminal accountability; yet the role that victims will play in the SCC’s criminal proceedings has thus far not been defined.

The conference follows previous training seminars for judges, prosecutors, and lawyers, held in December 2017 and February and April 2018.

“The conference was very good and especially beneficial in terms of general concepts,” said Saber Mahmoud, Vice-President of the Court of First Instance in Monastir, Tunisia. “We would be grateful if more conferences were organized on practical problems concerning the application of international law in relation to Tunisian law and that take a closer a look at comparative experiences and how to address special situations.”

Imed Mastouri, President of the Criminal Chamber of the Court of First Instance in Gafsa, Tunisia, offered a similar, tenuous endorsement. “From a theoretical point of view, the conference was good,” he said. “But we need [to incorporate] a simulation of a trial with experts from South Africa and other countries where trials have been similar to these cases. Such trials are unusual and strange compared with what we are accustomed to, where victims have been violated beyond all the legal principles we have learned.”

“We need workshops that include all the chambers in different regions and courts in order to unify the method of work in all the criminal chambers,” he added, stressing the importance of involving representatives from all parties and as many regions as possible.

The speakers tackled a range of theoretical and practical issues during the plenary and informal discussions. Experts from the international Commission of Jurists shared findings and recommendations from its recent analysis briefs on the SCC and on the SCC’s procedures.

In the plenary, ICTJ’s Deputy Executive Director Anna Myriam Roccatello offered several recommendations. She called for the IVD to make all the files and databases available to independent investigators from the SCC who would then determine which cases the chambers should pursue, the creation of a special independent office within the SCC that is directed to advance these cases, and the creation of an independent support unit within the SCC that is tasked with supporting victims whose cases come before the chambers and facilitating their participation in the proceedings.