In 2021, there were significant developments, some hopeful and some devastating, in the struggle for truth, accountability, and redress in countries around the world. ICTJ experts covered these events in commentaries and feature stories published on our website and in our newsletters. While 2022 is already underway and we at ICTJ are hard at work, we would like to pause a moment to take stock and reflect on the year that was. 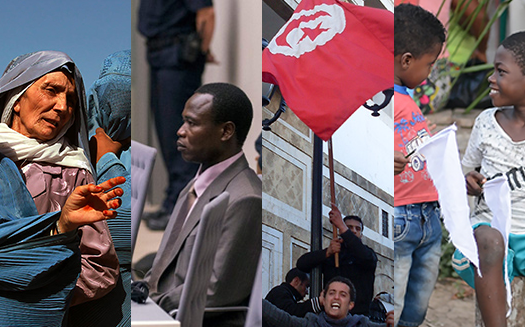 Transitional justice processes often take years to play out, and they require commitment, persistence, and patience from civil society, victims, governments, and institutions. In 2021, there were significant developments, some hopeful and some devastating, in the struggle for truth, accountability, and redress in countries around the world. In addition to frequent appearances in national and international media, ICTJ experts covered these events in commentaries and feature stories published on our website and in our newsletters. While 2022 is already underway and we at ICTJ are hard at work, we would like to pause a moment to take stock and reflect on the year that was.

Early in 2021, the International Criminal Court (ICC) issued its judgment in the Dominic Ongwen case, the first ICC verdict concerning the conflict in Northern Uganda. ICTJ Head of Office in Uganda Sarah Kasande and Program Officer Jesse Mugero wrote about the case in February and March. The ICC found Ongwen, a former senior leader of the Lord’s Resistance Army (LRA), guilty of 61 counts of crimes against humanity and war crimes committed between July 1, 2002, and December 31, 2005. In addition, for the first time since its inception, it found a suspect guilty of the crime of forced pregnancy, which was a common practice used by the LRA. The Ongwen case thus marks a key milestone in developing a progressive jurisprudence on gender justice and accountability for sexual crimes in contexts of armed conflict. For the 4,095 victims who were allowed to participate in the proceedings and a few others, Ongwen’s conviction means they can now look forward to reparations for the harms they suffered. However, many other victims of atrocities committed by the LRA and Uganda’s armed forces fell outside the scope of this case and were therefore excluded from the reparations process. For them, the verdict has little impact on their lives.

Last year, hope quickly sank to horror in Afghanistan as US forces hastily withdrew and the Afghan government fell to the Taliban days later. In June, ICTJ Expert Reem El Gantri spoke about our engagement in the country supporting Afghan civil society organizations and victims’ groups seeking justice for human rights violations and combatting gender and other forms of discrimination. By August, the outlook in Afghanistan had turned bleak, and ICTJ Expert Sibley Hawkins in a commentary called out the failures of the United States and in the international community to protect Afghan civilians. By October, our executive director, Fernando Travesí, was asking what the future held for an Afghanistan once again under Taliban rule. The country now teeters on the brink of massive famine, while the Taliban is systematically curtailing women’s rights and cracking down on civil society and voices of dissent. Afghanistan is a tragic example of how a country in transition can dramatically reverse course on the arduous path toward peace and democracy and return to an abyss of violence and repression at breakneck speed.

Meanwhile, the transitional justice process in Colombia, which celebrated its fifth anniversary in November, steadily advanced in 2021. Former members of the Revolutionary Armed Forces of Colombia (FARC) publicly took responsibility for crimes they committed. In a piece she authored in April, ICTJ Head of Office in Colombia Maria Camila Moreno recounted her experience bringing together ex-combatants of the various left-wing guerrillas along with those of right-wing paramilitary groups for the Ex-Combatant Narratives Roundtable. At the roundtable, ex-combatants took part in earnest, heartfelt conversations about the past, in which they meaningfully acknowledged their crimes, ahead of the of public statements by former FARC members.

2021 also marked 10 years since Tunisians took to the streets to demand “employment, freedom, and national unity,” in what became the Jasmine Revolution that toppled the Ben Ali dictatorship and ushered in a transition to democracy. In March, ICTJ Head of Office in Tunisia Salwa El Gantri reflected on the revolution’s still unattained goals and the measures needed to advance justice, provide equal opportunities to all Tunisians, and build the public’s trust in the government and economy. In September, weeks after Tunisian President Kais Saied assumed emergency powers, Deputy Executive Director and Director of Programs Anna Myriam Roccatello in a commentary expressed concern that Tunisia’s transition may be imperiled.

Victims are seeking justice and accountability in many other countries around the world, and ICTJ is working side by side with them. Last year, our experts offered their thoughts on justice for victims of Rodrigo Duterte’s “War on Drugs” that goes beyond criminal accountability, Denmark’s controversial policy to return refugees to Syria, resistance in Myanmar to the military regime, the prospect of a viable peace plan in Yemen, and the final report of the Gambia’s Truth, Reconciliation and Reparations Commission recently submitted to the government. We invite you to subscribe to our newsletters and be the first to receive these stories in your inbox.

PHOTOS (LEFT TO RIGHT): Women in Herat, Afghanistan, line up to collect bags of food and cooking oil distributed by the UN World Food Programme in June, 2012 (WFP); former LRA commander Dominic Ongwen appears in an ICC courtroom for his confirmation of charges hearing on January 21, 2016 (ICC-CPI/Flickr); protesters gather at the Government Square in Tunis during the Tunisian Revolution (Rais67/Wikimedia); two boys from the Cacarica river basin wave white flags at the opening ceremony of a memorial event in Chocó in 2019 (Maria Margarita Rivera/ICTJ).